A New eBOOK of Close-Up Mentalism from RedDevil 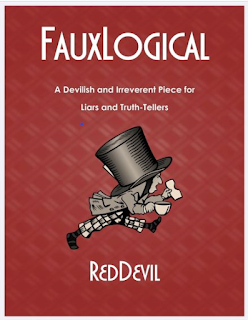 "As a creator, I have a tendency to pass up on 99% of all releases and instead only take interest in those which offer me a fresh set of tools to play with...If you are looking for a wonderful impromptu mental mystery to add to your repertoire, or are looking for some new techniques to play with, you won't be disappointed here!"
--Michael Murray, author of Piece of My Mind

RedDevil is back! After disappearing from the magical arts (he was kidnapped by life and taken to a "Hell" that not even a RedDevil can enjoy), he returns to earth with a brand new eBook of close-up mentalism!

"I had no idea how he could have any valuable information...The more I thought about it, the more perplexed I was. It was IMPOSSIBLE. There was absolutely no way he could know anything."--Madison Hagler, author of the Bang! chair test

It's called FAUXLOGICAL, and it is DIABOLICAL!

Take a well-known plot (actually two plots) in mentalism and design a routine that could fool spectators who know the plot backwards and forwards--MENTALISTS and MAGICIANS!

In essence, this routine is unapologetically designed as a rope-a-dope for mentalists who want to perform a routine for their peers at the magic club that "appears" to be run of the mill, but then gives them a surprise that will cause them to think and say, "Wait a minute..."

What is FAUXLOGICAL? Well, it's not just a one-off routine. It's an eBook in two parts.

"Fauxlogical is a lovely addition to this genre of effects. It's the sort of thing I really enjoy because it can be performed completely impromptu and adds further options to your toolkit."--Sudo, author of Mental-Diemensional and Hoshi's Lucky Star

The first part is a very familiar effect, a which-hand routine using the liar/truth-teller "engine."

But that's where it ends. Even though they know you are using the logic puzzle to "get" them, your colleagues still won't know how you did it.

How? Because it is a brilliant new method?

No. In simple terms, it will fool many of them because the method is far more, shall we say, analogue. Yet, they will be trapped in their own knowledge of a thousand routines like it. The logic questions are crucial, but they are not the core method. How can that be?

"RedDevil showed me this, and I was sent down the rabbit hole only to emerge without a clue. This is a very clever use of simple principles that are not the ones that you assume are being used. This is certainly a magician fooler, but not at the expense of the experience for laymen."--Mark Chandaue, author of Harpacrown

For those of you who like to collect neat little mentalism tools and principles, you are going to LOVE this part. Section TWO is a tool chest full of little devices you can use in a thousand routines.

Using the routine in the first section as a template, I will offer you a clinic on how to utilize some interesting little "pieces of devilry" (read: impromptu mentalism principles) that were not used at all in the original routine.

They are not only completely different methods in achieving the original routine, but they are also principles that you can use to create your own routines for decades!

Thus, this eBook is not just a routine in Section One, but a treatise on what happens when you take a simple method (in Section One) and layer it with other principles (in Section Two).


The Original FauxLogical Routine Conditions in SECTION ONE:
Contents in Both Sections:
FAUXLOGICAL is a digital PDF, approximately 100 pages in 16-Point Font. All pre-orders are via PayPal to my email address.

(*I do not believe anything is 100% foolproof because human beings do unpredictable things sometimes. With that said, this basic routine as described above is self-working if you follow the instructions. In other words, you don't have to jazz or get lucky. So accounting for human tendencies to do unexpected things, let's say this effect is 96%. Also, with appropriate considerations, I believe the effect can be repeated for at least a second time before people start looking at you crazy. With other methods mentioned in the book, it is DEFINITELY repeatable.)
Posted by RedDevil Mentalism at 1:57 AM